The Corleck Head may represent the old god Crum Dubh, who was buried for three days with only his head above ground, so that the young Lugh could temporarily take his place… 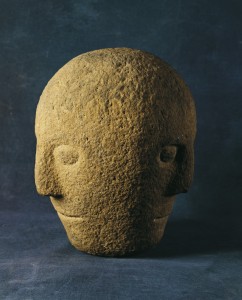 “Carved stone head. Early Iron Age, 1st – 2nd century AD. Known since it came to scientific attention in 1937 as the Corleck head, this three-faced stone idol was found in the townland of Drumeague, Co. Cavan around the year 1855. It appears that it was one of a number of carvings found, including a bearded bust now known as the Corraghy head that was later built into a barn in the nearby townland of that name. Thomas Barron, the local historian who brought the three-faced head to the attention of the National Museum spent a lifetime researching the local traditions concerning the find and he concluded that the figures were associated with a shrine located at Drumeague Hill. Nearby is Corleck Hill where it appears that between 1832 and 1900 a Passage Tomb surrounded by a stone circle and a circular embankment 70 yards in diameter were dismantled. The site of these monuments was the centre of an important Lughnasa festival that celebrated the harvest, an ancient Celtic tradition that survives into modern times. Other Celtic stone heads have been found in the vicinity such as those from Corravilla and Cavan Town and the find place of the three-faced idol is but twelve miles distant from Loughcrew, Co. Meath. A little further north there is another group of Iron Age stone carvings that appear to be centred on the vicinity of Emhain Macha, the main political and ritual site of ancient Ulster. The likelihood is that the Corleck Head was associated with a shrine reflecting Romano-British traditions located close to where the carving was discovered. The three-faced carving is the finest of its type and there is a small hole in the base to assist its being stood securely, perhaps on a pedestal. One of the faces is heavy browed and all of them have bossed eyes, a broad nose and slit mouth. One of the mouths has a small circular hole at the centre and this feature is also found on two of the Co. Armagh carvings and on another from Woodlands, Co. Donegal. There are several examples of this feature from Yorkshire the best known occurring on two three-faced idols from Greetland, near Halifax. The feature also occurs on a stone head from Anglesey, Wales. H. 33cm; Max. W. 22.5cm.”